The Different Types of Bathroom Taps

We know its a mine field out there for all bathroom products and we know it can be quite hard to choose right product for what you need in your bathroom. So we thought we would help with the differences between different types of bathroom taps and therefore help with your decision in choosing the right tap :)

You might think choosing the right sink or bath are high up on the list and very important when choosing the products you want to have in your bathroom... and you would be right! But choosing the right tap is definitely nearly as important as that. It isn't as easy as just simply choosing a tap you like the look of, with taps, you have to think about not just the style of them but the practicality of them too.

Manufacturers have made new and exciting ways to add a unique touch to your bathroom through taps, because styles of bathrooms are updating and changing all of the time. So yes, below you will find all the different types of taps and they will hopefully give you a much better understanding of all the different styles available and which ones will work in your bathroom.

Taps nowadays come in many different styles, modern or traditional, square or circular, aerated spout or waterfall spout. They mostly come in chrome but nowadays you can get black, nickel, brass, etc. You can even get taps with coloured LED's in the spout!

As always, feel free to comment and add your own perspective or knowledge :) 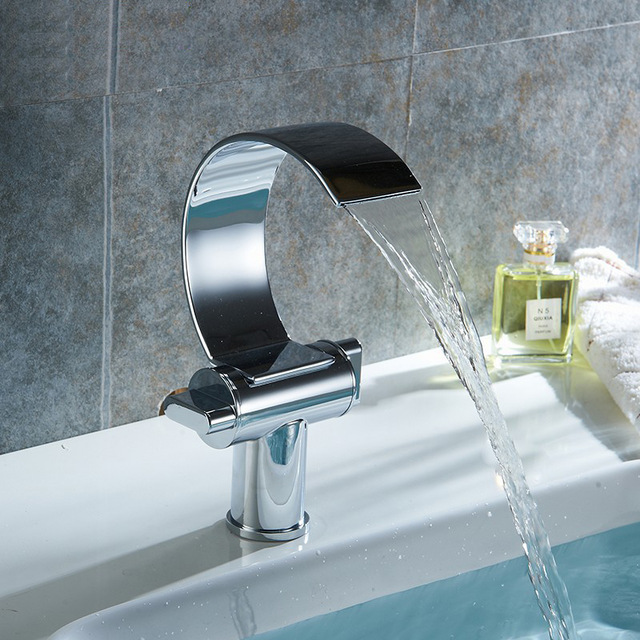 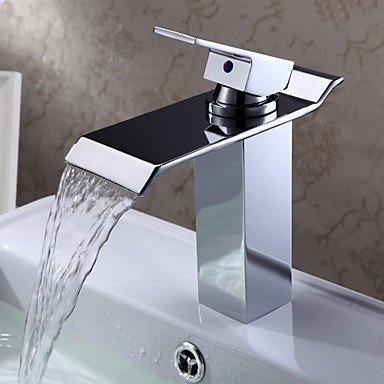 Deck mounted taps are taps that are installed on the surface of certain products, for example the bath or the basin, as you can see in the pictures above. They are installed using (normally) pre drilled holes from the manufacturing process of the products. The manufacturers will state on the description whether the sink/bath has no tap holes, 1 tap hole, 2 tap holes or even 3 tap holes. You don't want to buy a 2 tap hole sink for a mixer tap, as mixer taps only use 1 tap hole, this is an easy mistake to make when choosing your products so look out for that.

Deck mounted taps are the most popular type of taps in a bathroom as they allow the easiest access for plumbing and pipes to get water to the basin or bath, basically making it easier for the installer.

Mixer taps can also be referred to as 'monobloc taps'. These are being used more than any other types of tap nowadays. Rather than having the separate hot and cold taps, most of these taps come with a single level which control the flow of the hot and cold. These taps mix the hot and cold together to come out the same spout, which makes it so much easier to get the right temperature of water you desire. This basically means you are much less likely to scold yourself with hot water or to shock yourself with freezing cold water! Much nicer for when brushing your teeth or washing your face or just generally washing your hands!

With these types of taps you will need to make sure you have a basin with only 1 tap hole.

Bath filler mixer taps are very similar to basin mixer taps. They still mix the water to come out of one spout but the hot and the cold have their own individual levers. This makes it perfect for choosing the right temperature of water to fill your bath with. These are generally low pressure taps as well so will work with pretty much all systems.

Wall mounted taps, are as they say, mounted to the wall. They then reach out to fill the basin or bath. These are slightly harder to install as all the pipes will need to be hidden in the wall. This can be done by hiding the pipes in an existing wall or by building out a stud wall to hide the pipes. Wall mounted taps though are much harder to repair because the pipes are hidden in the wall. Where the taps are as well, the wall will is going to be more than likely tiled for a basin splashback or just generally around the bath. So if the taps need repairing, the plumber will have to take off the tiles and possibly damage the wall to get to the pipework, not fun. But this should be quite unlikely to happen, so we say, go for what you want as long as it is practical, after all you do get a warranty with us incase anything goes wrong :)

Pillar taps were the most common type of taps, being overtaken by mixer taps. We rarely ever install pillar taps anymore, it always seems to be mixer taps nowadays. But of course, everyone's taste is different and we would welcome someone wanting to install these taps in their bathroom, this type of tap would work better in a more traditional type of bathroom.

Pillar taps, as shown in the picture above, are individual taps that have their own internal valves that will control the flow of water from their individual spout. To install these taps you would need to ensure you purchased a basin or bath with 2 taps holes. Feel free to get in touch with us if you need any help of course!

Look.... you can pretty much put whatever you would like in your bathroom but we wouldn't recommend using these types of taps with a basin.. why would you? :) who knows, everyone's different.

Tall basin mixer taps are slightly different to your basin mixer taps as they are generally only used with sit on bowl basins so would require being fixed onto the worktop or vanity unit instead of the basin itself.

There would have to be enough space on the vanity unit or worktop to install the tap. For example, if you wanted to buy a 500mm deep vanity unit, you would not want to buy a sit on bowl that is 480mm in size from front to back as there would be no room for the tap

Floor mounted taps are generally used for freestanding baths, but can be used for any sort of bath. These types of taps are probably the latest development for a style of tap. Rather than the pipes being hidden in the wall they are hidden under the floor. They can be placed anywhere as long as the spout reaches the bath, the pipework can be redirected to where the tap wants to be installed or the tap is not in the way of anything else.

Again... not really recommended for basins

In every bath there is something called an overflow, this is installed so excess water in the bath does not 'overflow' and spill over the top. So if someone was to leave the bath running hopefully the house would not get flooded! An integrated overflow tap is part of this system, as you can see from the pictures the water comes out from the overflow, the overflow doubles up as a tap. It normally has a circle bit on the front which can be twisted to control the mixture of hot and cold water. This saves having any taps on the bath for a 'cleaner' finish.

We hope you've enjoyed reading about the different types of bathroom taps, if we can help with anything please do get into contact with us and we will be more than happy to offer any assistance. If not... enjoy your day :)